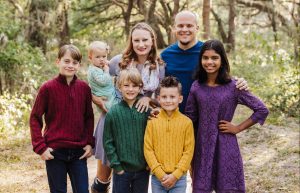 I was born in Miami, Florida and raised in Osceola County, where I have lived most of my life. I trusted Christ when I was 15 years old, responding to an altar call at First Baptist Church of Kissimmee. I graduated from Osceola High School in 2004 and married Melanie Ames two years later. Since then the Lord has blessed us with five children—Caleb, Cadence, Logan, Timmy, and Daisy—and I am truly blessed to say I am married to my best friend. I first felt called to life-long ministry during our honeymoon and later realized I was called specifically to a preaching ministry when I was 24. After finishing graduate school, I began serving in my first pastorate here in Saint Cloud, serving as Lead Pastor of Harmony Community Church for more than 3 years. I came to Celebration Community Church in 2017, where God facilitated the launch of a satellite campus in Saint Cloud. I was called as Campus Pastor of that campus in 2018 and later became the Senior Pastor when the campus transitioned to operating as an autonomous church—Grace Pointe Church—in 2022.

I would also recommend reading on notable figures in church history, including:

Responsibilities
Preaching, discipleship, vision
Family
My wife Melanie and I were married in 2006 and have five children: Caleb (2009), Cadence (2010), Logan (2012), Timothy (2014), Daisy (2019)
Places I’ve lived
Born in Miami, Florida, raised and married in Kissimmee, Florida, and lived in Saint Cloud since 2011
Kingdom Passion
I have a passion for the Great Commission and seeing it fulfilled in the local church. I long to see more and better disciples made in my own community and am driven to be part of the work necessary for people to come to hear and believe the gospel. I am personally expository preaching and training leaders for Great Commission work.
Hobbies
I love spending time with my family (we are vloggers and have a YouTube channel). I am a published author and enjoy writing very much. I also enjoy playing guitar and reading.