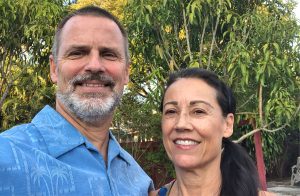 Following a broken relationship, I followed up on an invitation to church. I was saved that very day and was baptized a week later at the age of 26. A few years after retiring from BMX competition, I recommitted my life to the Lord and two months later met my wife Donna. Through a men’s discipleship group a year later, the Lord made it known that I would be involved in the great commission. Two years later I was commissioned to shepherd a home MiniChurch and lead a Jewish ministry at church for five years. For more than eight years I stewarded a ministry called Moto Ministries which progressed from a weekly Bible study into an evangelistic outreach throughout California with the OTHG motocross club until we
moved to Florida in 2018.

I had always desired to go to seminary, but it was cost-prohibitive while living in California. However, the Lord brought a different route for me and my wife Donna. Through a pastor and now friend, we both pursued a certification in Basic and Advanced Theology Courses and completed it in 2013. Through a different training methodology, that process radically grew our understanding of Scripture and how to apply it.

I met Pastor Mike at the Lakefront on the first day outdoors for the CCC St Cloud campus in 2020. Donna and I have been facilitators of the Jersey Ave Life Group since January 2021. Over the Summer of 2021, I lead the Hope at the Lakefront outreach on Saturday evenings. Donna and I serve on the Prayer Team. I help with weekly setup and Audio/Visual.

Family
My wife Donna and I met at church and have been married since 2004. Our Ray is married and has two young children.
Places I’ve lived
I was born in Whittier California and at age 7 my family moved to Denver. At fifteen, motocross became my passion and at age 23, I moved back to SoCal to pursue BMX and a professional career. Donna and I moved to Tampa Florida in 2018 and moved to St Cloud in March 2020.
Kindom Passions
I have felt and experienced the calling to share, teach, and preach about the Bible and of the Gospel of Jesus Christ. With the help of the Holy Spirit, I have led three different ministries through which I have learned to listen and respond to Him. I continue to look for ways to share and teach others how to apply the biblical principles that I’ve learned.
Hobbies
Being an athlete for all my adult life, I continue to enjoy walking, jogging, and cycling.